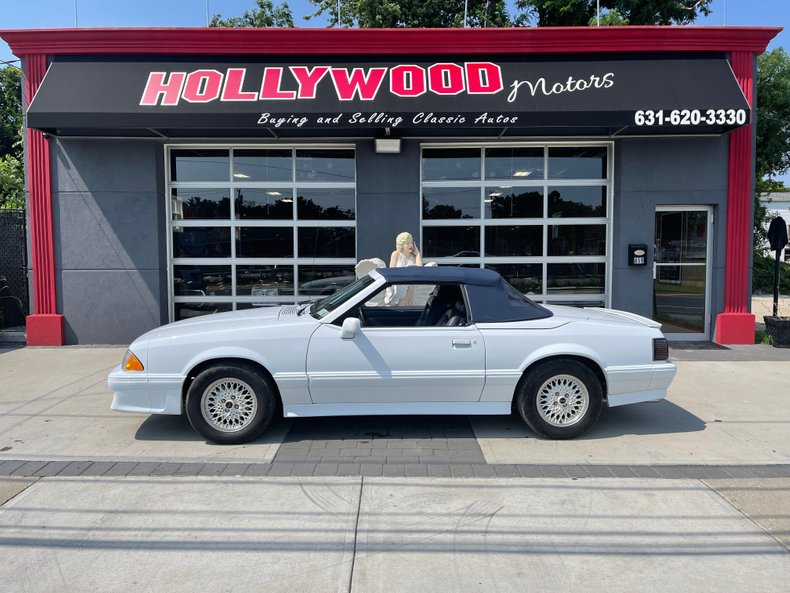 Between 1987 and 1990, slightly more than 1,800 Mustang coupes and convertibles were converted to ASC McLaren spec.
It was still primarily an appearance package, although new convertible models were given slightly more customization with a windshield that was raked back a further 20 degrees. Other changes included the removal of the rear seat, making the ASC McLaren Mustang a strict two-seater car.
They also had a revised body kit, a three-window soft top, five-slot directional wheels by Enkei , and a reupholstered interior with blue leather. One quirky feature: While the soft top is operated manually, a metal tonneau to cover the folded roof is electrically actuated.
Why were so few built? A well-optioned ASC McLaren Mustang cost some 50 percent more than a standard Mustang GT.

With 15-inch wheels and a wide range of colors, the ASC /McLaren Mustang was an attractive
Production of these unique cars in 1988 were only 1,015, before tailing off to 247 cars in 1989 and just 65 vehicles the year after.

What was so special about these cars in the first place? It turns out there were significant differences between these cars and production Mustangs. Sanford Block, operator of the ASC/ McLaren International Registry, offered a number of interesting details about these cars:

"These were special-purpose, two-door sedans built in collaboration between Ford and ASC/McLaren," Sanford says. "They were built as a coupe on a convertible frame with additional chassis and body bracing, but with many of the items normally seen on a Mustang omitted. Each car coming off the assembly line was black with Thunderbird Super Coupe seats and 15-inch wheels that were used for the sole purpose of transport over to American Specialty.

"Once there, all the cars had a special jig attached to them with suction cups that was used to cut the top off the car. Each of the cars was then fitted with a manual convertible top that featured Mercedes-Benz-style window openings. The windshield frame was also bent back another 10 degrees. The fabric was stripped off the seats so they could be covered in leather, while the rear seat was replaced with an elevated storage platform that contained two storage bins. The door panels were given courtesy lights and extra-long armrests."

THIS CAR IS SO RARE AND SO UNIQUE!! AND THIS PARTICULAR 1988 MCLAREN IS IN EXCELLENT CONDITION INSIDE AND OUT!