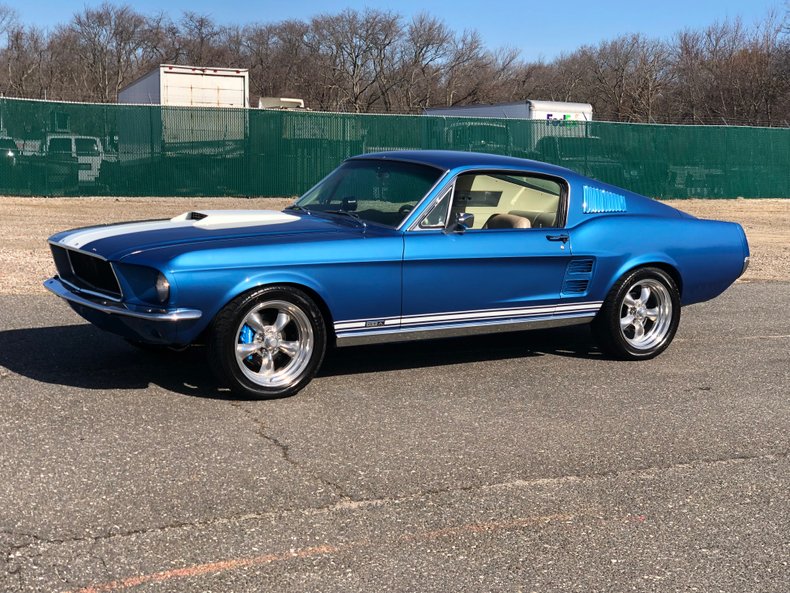 Where to begin with this INCREDIBLE car!!!!??

Let's start by saying this Fastback is in showroom condition! INSIDE and OUT! So nice it has won awards and was on the cover of a magazine.

Leather Bucket Seats. The rear seats fold down and are carpeted to match the floors and top side.

No Rust, No Rot

289 Engine with a 3 Speed Automatic Transmission which was ONLY offered in 1967! The transmission is a beefed up C-4 three speed automatic. The shifts are amazingly crisp. Should you decide to manually run the gears from first to third, there is no reason to release the gas pedal between shifts as the car moves to the next gear without hesitation, albeit chirping the back tires from first to second.

This Mustang has been customized, restored and pampered.

Front Disc Brakes with Drums in the rear. This car stops on a dime!

Pioneer AM/FM/CD and SirusXM... all with a remote control.

Interior lighting is European blue bulbs which give it a great effect.

All gauges operate exactly as they should.

MANY MANY more details regarding this beautiful beast are listed below. It's a long read, but worth it

Upper console has driver and passenger map lights. The lower is a full console with the rare “roll up” door under the dash, and cut outs for the front seat belt buckles. A custom cup holder was made in the same parchment material that fits inside those open seat belt slots. Floor shift is treated to a leather handle to match the interior.

The dash is brushed aluminum (GTA standard) as is the door panels and console. They are in good condition.

Along with the rack and pinion,a brushed aluminum steering column was installed that can be moved up or down by a stalk behind the directional stalk. The column also houses the button for the hazard lights. The key for the ignition was left mounted on the dash as it was from the factory.

All 1967 Mustangs have side vent windows. Both are fully operational and latch tight when closed. This was the last year for side-vent windows.

The roof sail has finned vents on both sides. They are functional. The chrome vents mounted from the inside are original and fully operational to allow fresh air into the rear cabin.

Everything is solid underneath and there is no rust, not even the tiniest bit of surface rust anywhere.

This car has a lot of speed modifications. You can obviously detect a cam (play the videos when you get them to hear the exhaust sound).

It has performance MSD ignition set up. Hi-revving, never breaks up at any speed.

Magnaflow or similar mufflers. Beautiful sound on this car.

It is exceptionally straight. All body panels are in line and gaps are better than when the car came out of the factory.

LED lighting under the hood in the engine bay, operational with push button switches under the hood. Gets a lot of attention at the burger shops and night-time car shows.

The oil has been changed every year

The car was born with a single drive-wheel differential operating via a stock Ford axle, changed out to a limited slip differential (or posi-traction as the GM folks call it) with both rear wheels driving the car.

The car is meant to be a top end performer, yet it takes off from a dead start, clean, with no bog down at all and without the benefit of any power-braking whatsoever. You're gone before the guy next to you even has time to react.

Tires are Michelin 245-45x17 all around, which replaced the old set of the identical size tires, they are practically new and recently rotated.

By the way, this is a real 1967 Mustang GTA. The “A” standing for automatic. It was a one-year option (1967 Mustang), so that makes the car a limited production model.

All GT equipment including front disc brakes, overhead roof console, as well as a center console between the bucket seats as part of the Luxury Bucket GT interior and interior lighting package.

The interior is factory color called “parchment”. It was originally vinyl and upgraded to leather (front and back seats) at the time of restoration. The stock buckets were replaced with the same style bucket seat, but both of new front seats now fully recline and are adjustable. The original set did not recline. The headliner was replaced as was the dash cover, and metal parts of the dash itself, the glove compartment, both doors and rear compartment panels, the kick panels, and both consoles were repainted. The carpeting was replaced and same color carpeting was also used in the trunk. The floor mats are fairly new and the driver's side tacked down so as not to slip under the driver's feet. The cigarette lighter is located inside the ash tray which drops out under the dash. The lighter works and useful for other devices like a phone charger, etc.

We can go on and on with the details, but seeing this Mustang in person has no equal!

Please call Hollywood Motors with any questions, or for financing information.... 631-620-3330
Trades are welcome.